Chasing Some Tail, North Bay, One Love and My First Album, a few words all tied together, telling a few stories from the Carr’s for another week in 2016.

Chasing Tail
Ever have one of those days that you are just running around like crazy? I have heard the expression, “Like a dog chasing your tail” a thousand times and although Bentley did some weird stuff he never really actually chased it. Kokomo however, is a different story. She is so comical. She does it all the time, and last week when I watched her doing it for what seemed liked 10 minutes, I sent myself a “blog” reminder email that simply said, “chasing tail”.

Kokomo will be walking slowly outside, and catch her own tail movement out of the corner of her eye and totally go crazy spinning this way and that, trying to get just a little bit of it. She looks like she catches it sometimes too, but never stops moving. Just changes direction. She seems smart, and I think she totally gets that it is actually attached to her body, but that doesn’t mean it’s still not fun to chase it I suppose. Perhaps she does it for her own amusement or maybe it’s some kind of exercise routine? I just know it sure is funny to watch her and even funnier if you egg her on a bit… “You almost got it… go Kokomo, you can do it… catch that tail!!”

North Bay
I always like spouting off a bit in the blog about the accomplishments of the girls. We are so very lucky that they both are amazingly creative, funny and all around great people. Well, boasting proud papa moment here over the last bunch of weeks, Jordyn was part of the senior girls curling team at her high school. They opened the season, with a gold medal win at their first bonspiel and continued to ride an unbeaten streak into their season. They tied a game near the end of the season and then the following week lost a game to that same team, and in the finals a couple of weeks ago, ended up loosing one more game to that same team. That left them with a Silver Medal in all of Peel and they got invited, as well as the gold medal team to play in the provincials this past week in North Bay.

They didn’t fair well in the cold north, but by all accounts they had a blast anyway. They ended up meeting new people, seeing a different part of the province, and creating some life long memories doing something that they all love to do. We missed her for the 4 days, but through absence; grows fondness so she came back a little taller in our eyes. So very proud of the overall lesson learned as well, that if you try hard and work with your team and if you throw life’s rocks just right, you to can experience some fun things. Great job Jordyn!

Album
Ok so true confession time. The very first Album I ever purchased was Zenyatta Mondatta by The Police. If you know your music or in the least are able to Google, you would find out it was released in the fall of 1980. I don’t think I have ever told anyone that, or at least it has never really come up in conversation, but this week I thought of that event and the process and it brought a smile to my face on a couple of different levels. 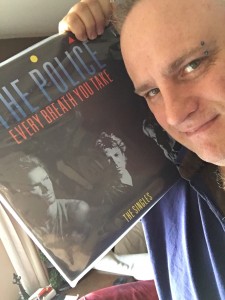 You see, before Jordyn left on her trip, she wanted to check the balance on her debit card. So I took her to the bank. What she didn’t know was that I brought along a big zip look bag full of change I’d been collecting over the last year. With Jordyn’s help, I dumped it all in the coin counting machine and was pleased when it spit out the voucher for $248.89. The surprise was that I split the proceeds between the girls and that left Jordyn with more than she needed for her road trip. I guess that gesture made it so that she wanted to pay me back in some small way, so I was the only one in the family to get a souvenir from North Bay.

Jordyn, knowing that my office walls are covered in 45s and that I like the look and sound of records, decided that she would buy me some vinyl. And without prompting or coaching or that little nugget of information about my first album, she laid out her 5 dollars for The Singles – by The Police. So, not only do we share a little portion of DNA, we also have in common, the artist of the first album we each bought all be it 36 years apart.

One love
I love driving with the girls and have talked about the fact that we always have music playing. Sometimes, when I am on the stations that play what they call “old” music, I am surprised to hear them hum or even sing along. One day a while back, with Julia in the car and the music loud, I heard the familiar opening of one of my all time favourite summer, windows down driving songs and Julia didn’t miss a beat, and started singing along right away and it amazed me.

In amazement, I said, “How do you know this song Buglia?” and in the most incredulous tone she could muster she said, “Who doesn’t know Bob Marley Daddy?

Remember Me
Who doesn’t like to be remembered? I suppose there are some that want to stay off the grid and live their life with little if any movement in their life pond, but the question struck me odd the other day when filling in a login field on a bank website I was visiting. When did the question change? Those stupid little, horrible for security check boxes that ask if you would like the website to record your login credentials in a little cookie someplace, no longer say “remember password”. Now for some reason they say, “Remember Me, click here”.

I found it odd and thought a lot about that, seemingly simple turn of phrase. In an instant it made me question whether I was worthy enough or memorable enough to warrant a little check. Have I done enough or have made an impact or difference in this world. It just seems so much larger of a question by personalizing it as they have and I had to think about it for a while. So, although I did NOT check the box, I want to be perfectly clear about this. Yes, please, please remember me.

In closing
I love my iphone and love Siri, but I don’t have the level of reliable relationship that Julia has with her. Perhaps out of a bit of laziness or just a lack of want to type, Julia asks Siri on her phone to do just about everything for her. “Siri can you please set a reminder to empty the dishwasher in 1 hour!” “Sure Julia I have set that for you.” “Thank you Siri, Goodbye” “My pleasure Julia, I live to serve” Each and every day, I overhear a conversation like this and think, wow this kid is smart but that phone is the bomb!

She doesn’t know everything though, this Siri thing. Sometimes she fails. More often than not, it is during my conversations with her. Maybe I talk too fast or too slow? The other week I asked something like, “Siri can you call Nathalie at work” and she said, “Call Nathanial Bloke?” I don’t even have a “Nathanial Bloke” in my phone. Fail. So when I got a text from Nathalie this week, outlining how Siri had some issues regarding paternity and it was started by the girls, I justifiably laughed.

The convo I understand went like this. I had done something to deserve praise so Nathalie asked the girls, to send a text to me and say, “Thank You!” So, Jordyn grabbed the closest phone—Julia’s, and hit the home button and said, “Siri text dad: Thank you!” Followed by a slight pause, Siri answers: “I’m sorry I don’t know who your father is.” Well Nathalie lost it laughing and so did the girls, and now I suppose Nathalie has some explaining to do.

Off to get a paternity test!
Thanks for reading and have a great and safe week!
Jim

Thanks for reading... your Comments are always helpful, so let me know what you think... Thanks and have a great and safe day